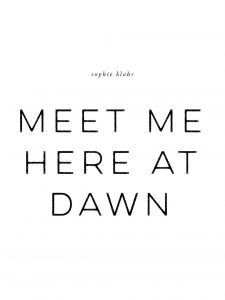 Meet Me Here at Dawn by Sophie Klahr

Sophie Klahr doesn’t offer much biographical information on her website, http://www.sophieklahr.org. It’s as if the poet could be anyone, a non-person, non-entity, a collection of words. Fragmentary constructions are abundant in her starkly stated and marvelously tangible poetic meditation that examines the body, whether a dead or a living one—but mostly, the body as an epistemological site, a poetic object. Indeed, just as the poet could be anyone, the body is invoked for its various metaphors as much as for its corporeal purpose. The book’s second poem, “Vetiver”, explains

The dead are washed in the way I’ll wash my body now, so care-
ful to be clean in case God comes and wants to touch my
mouths, wants to hide pieces of my self in me. Now when you
feel your self unraveled, you fly back to my body
with your piece of God. Now whose hand is whose?

Hidden pieces of selves is an accurate diagnosis for our compartmentalized condition. Our true selves are often hidden from us to such a degree as to be effectively nonexistent, while the selves of others remain inaccessible due to their own suffering or inability to communicate. And God—how does it come in, which mouths does it breathe through, how does it handle its pieces in each of us? God, hands, words, mouth, the skin are building blocks employed in various sequences, accruing significance as we keep reading. But is this “the whole,” or just part of the whole? Is this a jigsaw puzzle of the body, or of meaning, spirit, responsibility?

In “Opening Night”, this theme is continued:

a bright pill      Here, there are no photographs
of my hands      Here, systems of lips

Do wings belong to that place where God is harvested, or is it the other way around, the body itself is God and is therefore sacred in all its manifestations? But gun is also present in this poem, whether Chekhov’s or our own, hidden in the basement of our subconscious. The poem proceeds to say,

The gun goes off and something
like a shard of glass slips, to nestle

at the edge of your eye, forever…

Our actions are loaded and all of us are, in the end, bodies. Another way to put this: If bodies exist, then a way of their destruction must also be available. Whatever rests in the bullet’s way becomes a target. Is there anything that is not, in some sense, violence? After all, in “Some Notes on Shadows,” we learn:

The story goes: my father first held me
one morning at the window of the hospital.
That is a mailbox, he told me,
that is a tree. He did not mention the shadow.

As readers, we appreciate the shadow. Shadow, the ruler we use to measure light. Or is it the Jungian shadow, the unconscious open to both negative and positive manifestations? And in the physical realm, surely sickness and the eventual death are among the darkest shadows a body casts. “Before Results” explains,

… And now
what of our mouths? Would you kiss me?
Could we screw our sickness more deeply
inside of our skin? Could we manage to keep
our hands to ourselves until we healed and
will we? Will we heal? There’s a light
that pours from us—is it light? Can we
carve it from our bodies, burn it, offer it up?

It’s not only impossible for us to heal—it’s undesirable, selfish. Indeed, who would put an end to that light? “After the War I Dreamt Of Nothing  But the War” adds,

When the nurse on the phone won’t tell me
where you are, I turn my body into wind

troubling the city of hospitals.

Slang of nurses, blood numbers, legalities;
my disease has made me fluent in Emergency;

The entire book rings with an undertone of emergency. And the fragile body remains, burning and not burning—a tool for work, transportation, sex, a well built house for these minds we carry—an instrument of thinking, of poetry. Or is it Kafka’s metaphor of the body from “Penal Colony” with the owner’s guilt inscribed on it? Perhaps the book is the body and the poems are scars? Are our bodies, themselves, innocent? “Cell Photo” offers:

there is no glossary not for this

breathe deeply he says,
and touches a cold metal spot to your back

is this all breathing is?

Somehow, No seems the only fitting answer. Breathing is more, much more. It’s being there with the other in the moments of bodily joy and dysfunction, in bright and bitter mental spaces. Breathing is this book and the space around this book. We’ll gladly meet the poet at dawn with nothing but thoughtful humanity to encounter.

Born in Russia, A. Molotkov moved to the US in 1990 and switched to writing in English in 1993. His poetry collections are The Catalog of Broken Things (2016), Application of Shadows (Main Street Rag, September 2018) and Synonyms for Silence (2019). Published by Kenyon, Iowa, Massachusetts, Atlanta, Bennington and Tampa Reviews, Pif, Volt, 2 River View and many more, Molotkov is winner of various fiction and poetry contests and an Oregon Literary Fellowship. His translation of a Chekhov story was included by Knopf in their Everyman Series. He co-edits The Inflectionist Review. Please visit him at AMolotkov.com.